Amboseli National Park is the Second most popular national park in Kenya after Maasai Mara,260km(160miles) from Nairobi City to the park. Amboseli lies north-west of Mount Kilimanjaro, on the border with Tanzania Southern Kenya, eastern Africa. It is one of Kenya’s most popular parks crowned by Mount Kilimanjaro, Africa’s highest peak. It is among the largest surviving National parks in Kenya and East Africa situated in southern part of Kenya in Kajiado district, 62km Bus drive from Nairobi to Kajiado at about $17-$28 which takes 6hours and 2min,and approximately 39miles by Air(Bird fly)which is the shortest distance and fastest means costing about $90-$160 and takes 2hours and 25min The park is seated on a 39,206 hectares of land(392km, 151sq mi) at the core of an 8,000km (3,100 sq. mil) ecosystem that spreads through the Kenya-Tanzania boarder.

The name comes from a Maasai word “Empusel” meaning Salty, dust. The ancestral inhabitants of the area are the Maasai people. The largest percentage of tribes residing in this region is the Maasai tribe since the local people are mainly Maasai. However, there are other tribes of people staying in the land from Kenya and the neighboring regions since the park is on the boarder of Kenya and Tanzania.  It is one of the best places in Africa to view large herds of Elephants. Its recorded as the “home to the Big Five”. Referring to the large African animal species which are known to be deadly and dangerous. The Big Five include the Lions, Leopards, Rhinos, Elephants and the African Buffalo. The term “Big Five” was used by the big-game hunters when referring to the most difficult animals to hunt on foot in Africa. 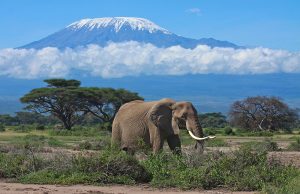